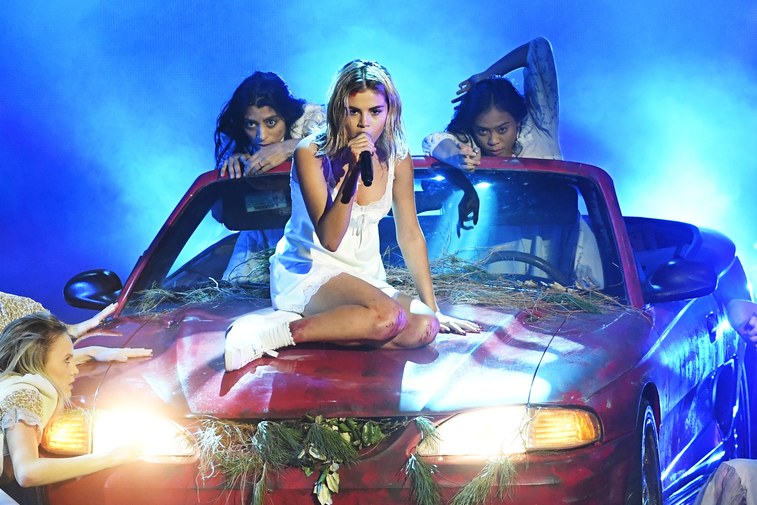 Newly blonde Selena Gomez gave perhaps her strongest performance ever at the 2017 American Music Awards this weekend. The performance began with a car in a misty “forest” as wolves howled in the background. From somewhere in the fog, Selena belted the opening lyrics of her new single, Wolves. As the mist disappeared, Selena was revealed to be lying in front of the car in a white negligee, wet-look hair and a cross necklace with her knees painted to look as if she’d scraped her knees.

A kiss seals the deal! Justin Bieber and Selena Gomez are back together!

She was then joined by backup dancers dressed in white lace nightgowns. Her collaborator and producer, Marshmello, of the track remained in the background along with the band. After Selena concluded the song with a heart-wrenching delivery of the last lines, she received a well-deserved standing ovation. The performance is important because it is her first performance in over a year because of her lupus diagnosis. Although the performance induced goosebumps, many suspect that the songstress is guilty of lip syncing throughout her performance.

E! News reached out to Selena’s rep for possible comment, but she has yet to address her haters publicly. While some Selena fans defended the artist, applauding her show of such strength after privately struggling for months, others felt otherwise. It seems like her legendary performance has fallen flat…What do you think?