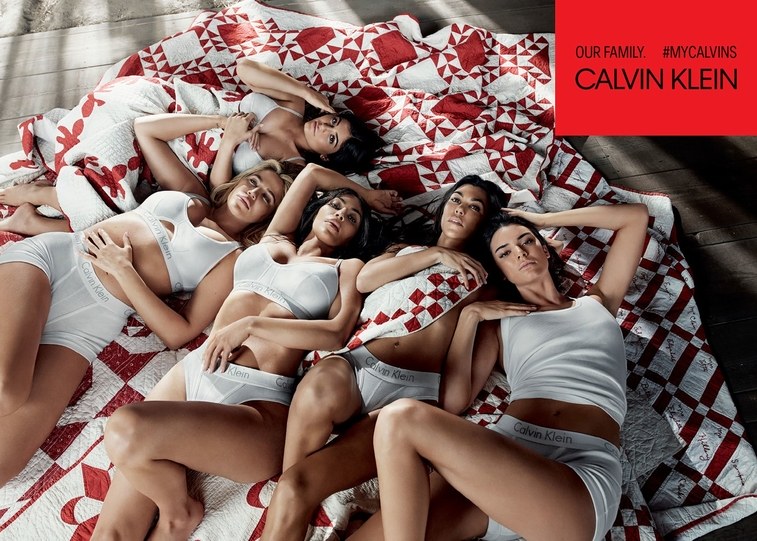 The Kardashian-Jenner sisters are officially the new faces of Calvin Klein and are starring in in the brand’s latest #MyCalvins ads together. The ad reads, “Our Family. #MyCalvins,” and it features Kourtney, Kim, and Khloé Kardashian and Kendall and Kylie Jenner.The photo was taken by Willy Vanderperre in LA.

Kylie has been out of the spotlight for a while now so it’s refreshing to see a photo of all five of the sisters together. Kendall has already been the face of Calvin Klein. Each woman in the family is pictured in an outfit that perfectly fits their own style. This seems to be he first-ever non-Kardashian branded ad campaign the five sisters have starred in together. In one image all of the girls in classic white cotton undies and bras or tanks. Lying on a backdrop of red-and-white quilts in a barn setting.

In another photo, each woman is standing in what looks to be the same barn setting. Kendall embraces free the nipple but it holding a quilt to her chest to cover her bare torso. Kim is centre stage in all denim; Kourtney is wearing her signature white tank top with high-waisted pants; and Khloe is pictured in the back in all white. In both shots, it is worth noting that Kylie is covering her stomach…which is suspect to say the least. Especially with pregnancy rumours swirling around.

Justin Bieber’s mom defends him regarding Selena Gomez mom’s disapproval
Harry Styles could be the next James Bond and fans are losing it!
Advertisement