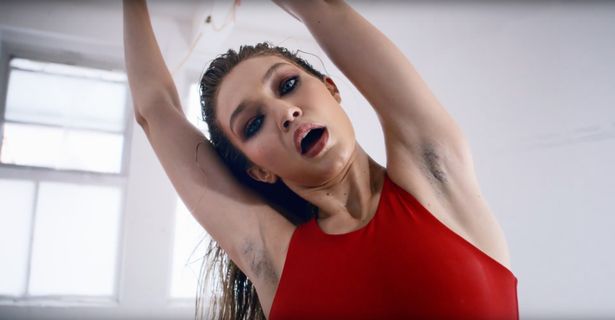 Gigi Hadid is definitely not shy when it comes to making a statement and these photos prove it! Gigi has used her video for Love magazine’s annual advent calendar to make a very empowering one indeed. In the video it’s clear that Gigi has skipped a wax under her arms as she throws punches for the calendar’s ‘stay strong’ theme. She tells the camera: “I’m Gigi Hadid. Today is free form day.”

When asked about the video Gigi revealed that:

“It’s celebratory of epic human beings and always pushed boundaries. The Love Advent kind of feels like a holiday year book in a way.”

Gigi Hadid and Zayn Malik have also just recently celebrated their 2-year anniversary together. The couple met at a Victoria Secret after party and reportedly hit it off immediately. They have both been fairly open about their relationship, especially on social media. The two briefly took a break last year but they reunited soon afterwards.

Gigi did not walk in this year’s Victoria Secret Show, however. Just weeks before the show Gigi announced that she would no longer be walking in the show. It was never revealed why she pulled out of the show but fans speculated that it had something to do with a previous Snapchat misdemeanor. To find out more, click here.

The art of contouring: Gigi Hadid collaborates with Maybelline