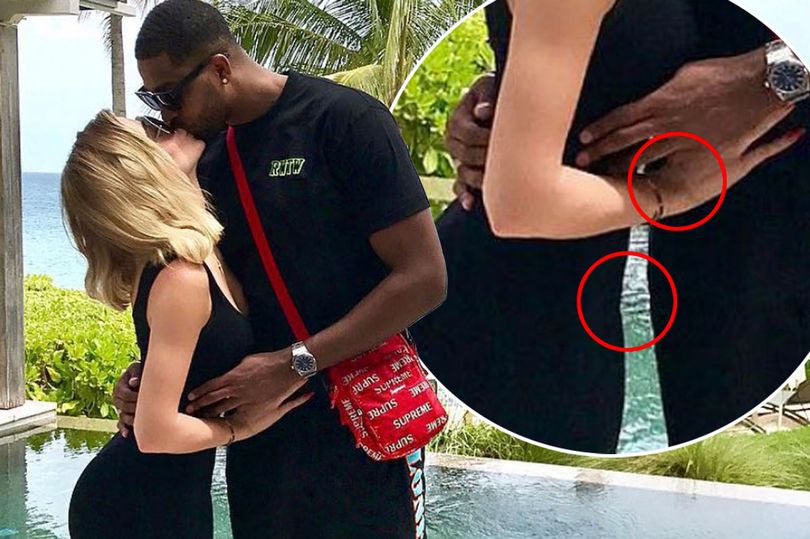 Khloe Kardashian shared a pic of herself planting a kiss on Tristan Thompson and her figure really isn’t assuring us that the ‘pregnancy’ rumours are true. But before you get discourages zoom in on the couples hands.

A fan pointed out that where her hand meets his, it’s blurry. While some assumed the photo might have been taken a lot earlier in the year, others said it looked like it had been photoshopped.

Khloe’s post comes soon after Scott Disick appeared to have confirmed she’s expecting.  Asked if he’s got any parenting pearls of wisdom for Khloe, Scott – who has kids Mason, seven, Penelope, five, and Reign, two, with ex Kourtney Kardashian – said he plans to help her as she goes along:

“I feel like all of us are so close that all of our children are kind of brought up in the same vicinity, or one block over, that everybody’s kind of there for each other. I don’t really need to give advice per se because, we are right there. It’s not like long-distance, ‘hey, maybe you should try this?’ Everybody so hands-on that I feel like it will happen within time.”

She wrote on her KhloewithaK blog on Monday that she and Tristan have decided to move in together. She pointed out the difficulty of maintaining a long-distance relationship and that she is happy to be living together eventually. Many are taking this move as a hint that she is indeed pregnant.