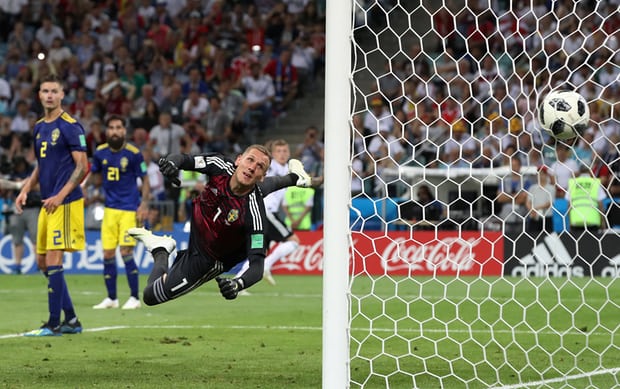 Yesterday was really all about Germany. Belgium beat Tunisia 5-2, clinching a convincing victory, and Mexico emerged victorious against South Korea with a 2-1 score-line. The Germany vs Sweden game was a match that will undoubtedly be viewed again and again if Germany end up doing well in this World Cup. Germany went into the game needing a victory if they were to retain control over their World Cup future, after their humiliating defeat against Mexico last week. The match ultimately went in Germany’s favour with a final score-line of  2-1, but this result can tell nothing of the drama that unfolded at the Fisht Olympic Stadium in Sochi. Sweden were the first to score, and looked the better team for huge sections of the match. Germany equalised in the second half, but despite the territory and possession they enjoyed, couldn’t find a winner. Germany’s Jerome Boateng’s sending-off  in the 85th minute for his second yellow-card offence certainly didn’t help the situation. Deep into injury time, however, Germany was awarded a free kick outside the box. Toni Kroos, who had had a hand in Sweden’s goal, produced a gorgeous, curling shot into the top right corner, sending the German fans wild. Shortly afterwards the whistle went, and Germany emerged victorious. This was a brutal end to the match for Sweden who had fought so valiantly throughout the game, and arguably deserved a point. However, at least Germany have been brought back into contention for the next round. It just remains to be seen if they can pick themselves up to their previous World Cup performance level, or if their ill-discipline and lack of an edge in front of goal will hamper their progress.